As a few friends are now following us into parenthood, I thought it might be helpful to put down on paper some of the things we found most useful. In that spirit, here’s part 1: baby books that we liked. Many thanks to Nancy Kurylowicz, who first pointed us towards many of these books.

END_OF_DOCUMENT_TOKEN_TO_BE_REPLACED

Spoilers ahead. Like any good techie Vancouverite, I know my Douglas Coupland. My favourite novel remains his 2003 Hey Nostradamus! – a very human, relatively realistic novel, where the characters and relationships take priority over the cultural insights. jPod, by contrast, is Coupland at his quirktastic extreme. It’s a very dark, bleak take on humanity and the amorality of the present day.

On the one hand, I recognise the context at a glance; the perks and psychoses of the video game industry are only too familar, down to the tiny details like trying to beat Super Metroid in under an hour. I’d be interested to hear from someone way outside that context, to see if all the discussion of texture artists and so on actually makes sense. The comparison of techies to autistics remains too scarily accurate, I suspect; Wired has even commented on the unusual rate of autism found in Silicon Valley, when techies mate with techies and many recessive traits are expressed simultaneously. Curious stuff…

The hectic go-go-go over-the-top tone really put me off initially, but it quickly evolved into some real belly laughs as everything got progressively more insane. Coupland’s quirky books are endlessly quotable, and his use of himself as a narrative device and character are utterly fantastic in jPod.

But the central theme of the book? I’m not sure what to make of it. My take on it is that jPod is indeed a post-Google version of Microserfs, where the utopian dreams have faded and revealed the ultimately vacuous uses of new technology. Google and the Internet permeate the entire book, and yet are never used for any positive purpose; they have become simply another part of the entertainment/consumer sphere. All of the world’s information is now at our fingertips, but we don’t really want it. We can no longer feign ignorance of all the problems around us, so we have to invent new coping mechanisms to allow us to avoid dealing with the problems of the world. Ethan is just an example of this coping mechanism: an amoral disinterest in the madness unfolding around him.

Did it have to be so bleak? Did all of the characters have to be so forgettable? Hasn’t this essentially been said before, many times?

So, like everyone else blogging about this book, I’ll close with a few quotes.

“Oh God. I feel like a refugee from a Douglas Coupland novel.” [Beware, Little Lytton. He’ll be making submissions soon.]

“And the air [in China]! Okay, imagine that you’ve built a bonfire of telephone poles – the ones dripping with creosote – and throw in a fax machine, a photocopier, some asbestos stacking chairs and a roasting chicken.”

“Inside the house here, the bathrooms have no doors, and it’s a liberating feeling to be in them, it really is. Doors are nothing more than flat wooden burkas invented to keep women from feeling proud and fallopian.”

“You spend your life feeling as if you’re perpetually on the brink of being obsolete – whether it’s labour market obsolescence or cultural unhipness.”

And, in a non-sequiter, my favourite GenX quote, from Dag’s father: “Hey, Sport. Isn’t the smell of gasoline great? Close your eyes and inhale. So clean. It smells like the future.”

It’s been a good few months for my fiction consumption. After losing interest in science fiction after high school, and getting really into non-fiction, I haven’t really read much. Vacations are good for my intake, and so is riding transit to work. I’ve had a bit of both in 2006, and so far I’ve made it through the following books, fiction and non-fiction:

… plus the recently mentioned Paris 1919. By my recent standards, this is a redoubtable feat: two books a month! (Even if 40% of those were still non-fiction…) 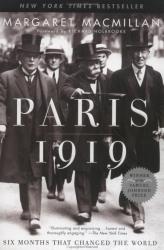 I just finished Margaret McMillan’s book this week. It discusses the drafting of the Treaty of Versailles (and others) following World War I, led by Britain, France and the USA. The Austro-Hungarian empire and the Ottaman empire had both collapsed as the war ended, leaving many new ill-defined nation-states in their wake. The treaty was born of noble intentions: an idealistic American president wanted to do away with the old ways of diplomacy, and draw borders based on nationality and ethnicity rather than imperial ambitions, drawing on the language of “self determination”. Those ideals were diluted by the ambitions of the various European powers, by shifts in popular opinion back home for each country, and by simple inattention to countries outside Europe itself.

The author presents the material in context, and it’s very interesting to see the foundations laid for future conflicts, from World War II to Kosovo and Kurdistan. I found it fascinating to see so much of world politics interlinked. In one section, she describes Japanese aims at the conference: they wanted the new League of Nations to include racial equality as a founding principle, and they wanted to take over a German colony (Tsingtao) on the Chinese mainland, largely for their own imperial ambitions. Due to racism at home, the American delegation could not accept racial equality, but felt the need to placate Japan. So, they gave way on the principle of “self determination” in Tsingtao, and handed it over to Japanese control, where it proved valuable to later Japanese ambitions. To me, this speaks to the conflict between the purported ideals and actual behaviour on in the international stage. The USA is largely presented in a sympathetic light in this work, but the period also predates America’s true rise to power. The great powers of the age (Britain and France) are seen in a much harsher light, and their behaviour is strikingly similar to contemporary American action.

Yes, it’s a tough slog: you could describe the book as 500 pages of geographical and historical minutiae. But the content is compelling, and the writing keeps the pace moving by including details of the personalities and charisma involved in the negotiations themselves. I really enjoyed the book.